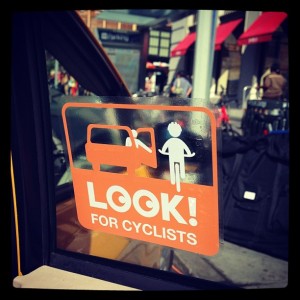 Bicycling related injuries are a complex problem. Take for example injuries related to “dooring” – in which a car driver or passenger opens a car door into the path of a cyclist, causing the cyclist to hit the door or veer into the path of oncoming traffic – which are becoming all-the-more common in our cities. Real video examples of this risk can be seen here and here.

Multiple factors contribute for the occurrence of “dooring” events, including those related to the behavior of road users, the infrastructure, traffic regulations, policies, and even recommendations based on bicycling safety research.

It has been suggested that the lack of awareness among car users can be in part explained by the limited efforts of city administrators to change the attitudes and social norms via increased penalties for “dooring” bikers and stronger campaigns promoting looking for bikers on the road.

“A column in the New York Times, “Is it OK to kill cyclists?”, was prompted by the observation that “motorists in America generally receive no punishment for crashing into or killing cyclists, even when the ‘accident’ is transparently their fault.” In the Netherlands, the opposite is true: “if a motor vehicle hits a cyclist, … it is always assumed to have been the driver’s fault… ” because “the law treats pedestrians and cyclists as weaker participants in traffic…” The result is far fewer injuries to cyclists: 12 per billion km cycled in the Netherlands versus 58–109 in the USA.

Editor’s comment: Bicyclists need better protection. I am tired of complaints about how some cyclists behave. Their foolish behaviour mostly leads to harming themselves. In contrast, the far more dangerous car and truck drivers tend to be tolerated. Until there is equal condemnation for driver infractions, I suggest we cut bicyclists some slack. An example: recently, coroners reports were issued following three bicyclist deaths in Montreal. In the last year, 92 bicyclists were doored; 58 were taken to hospital and 2 died. The fine for dooring is US$30! Alongside a public awareness campaign reminding drivers that dooring is illegal, one coroner recommended charges of criminal negligence and a substantial increase in fines. “Motorists (must) accept that cyclists … are not obligated to restrict themselves to bike lanes.” It is time now for the balance in North America to swing in the direction of the Netherlands.” [emphasis ours]

Another contributing factor to “dooring” is unsafe infrastructure. For example, even if bike lanes might be associated with overall risk reduction on average, they become a problem when built near to car parking spots, as open car doors usually block most of bike lane areas giving bikers no options to avoid crashes.

A 2014 commentary in Injury Prevention, Unsuitability of the epidemiological approach to bicycle transportation injuries and traffic engineering problems, argued that problems such as the ‘door zone’ are also unwittingly created through the application of unsuitable methodologies in an attempt to solve complex problems:

“bicycle lanes have through systematic review received epidemiological approval. In cities around the world, these lanes, whether curbside of parked cars (therefore being cycle tracks) or roadside (ordinary bicycle lanes), typically run in the door zones. They are thus an obvious hazard. What is the common remedy offered, by epidemiologists and governments? Hypervigilance and luck, to be provoked by reducing turnover or putting the conflict on the passenger and curb side, large fines, stickers reminding drivers to watch out, advice to open the door with the opposite hand or for riders to look through vehicle windows for occupants’ heads, or even for occupants to open vehicle doors inch by inch”

It is true that bicycling safety is a complex problem. Indeed, complexity, by nature, increases the unpredictability of effects.  Likely, solutions to the “dooring” problem and others alike, would require embracing this complexity in scientific research and policy development, and also the work of of multidisciplinary teams, including engineers, road users, epidemiologists, sociologists, etc., that can study and rethink bicycling safety from different angles.

Two examples of strategies that are working to address this complexity are Vision Zero and Fatality Free Friday. Both bring together a diverse range of stakeholders – such as local traffic planners and engineers, police officers, policymakers, and public health professionals – to work towards safer mobility.

In the words of Leah Shahum, director of Vision Zero:

“traditionally, traffic planners and engineers, police officers, policymakers, and public health professionals have not collaborated in meaningful, cross-disciplinary ways to meet shared goals (partly because they literally did not have shared goals for safe streets).  Vision Zero acknowledges that there are many factors that contribute to safe mobility infrastructure, enforcement, individual behavior/education, and policies — and all must be coordinated with a safety-first approach.”

Injury prevention, at its core, remains a complex endeavour and one in which the strengths of multidisciplinary teams and different fields of research must be harnessed for full effectiveness.