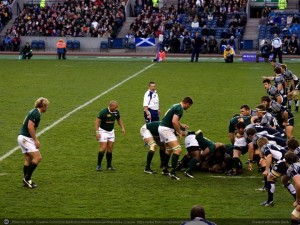 A study in the June 2015, Volume 21, Issue 3 of Injury Prevention, The BokSmart intervention programme is associated with improvements in injury prevention behaviours of rugby union players: an ecological cross-sectional study comes to us from researchers based in South Africa. This research assessed whether player behaviour improved since the launch of the BokSmart nationwide injury prevention programme for rugby union.

One of the authors on this paper, Dr James Brown, kindly agreed to answer a few questions on this work for this blog post. James is a Post-Doctoral Fellow for BokSmart and the Chris Burger Petro Jackson Players’ Fund at the Division of Exercise Science and Sports Medicine, University of Cape Town.

1) Tell us about BokSmart. What is it and why is it important?

BokSmart is a nationwide injury prevention program for rugby in South Africa. It is based on the successful New Zealand program, RugbySmart, and is a joint initiative of the national rugby federation of South Africa – the South African Rugby Union (SARU) – and the Chris Burger Petro Jackson Players’ Fund. Mainly through extensive coach and referee education, the program attempts to reduce all injuries, but specifically catastrophic (permanently disabling) injuries in players. Preventing injuries is particularly important in rugby as it is a collision sport with a higher risk of injury than most other sports and because it is particularly popular in South Africa with an estimated 400-500,000 players.

2) I know that you are active on Twitter (follow James @jamesbrown06), so what is the main message of this research in 140 characters or less?

3) What are the implications of the findings of this study for readers of Injury Prevention?

4) This research focuses on player behaviour, why is this an important component of an injury prevention programme?

Besides what is mentioned above, this study was also an important comparison to New Zealand’s evaluation of RugbySmart, as BokSmart used a very similar questionnaire to assess their players’ behaviours.

5) Tell us more about Rugby Science

Starting the RugbyScientists.com website was an attempt to deliver some of the plethora of useful, practical scientific research that exists in rugby to the end-user. A colleague, Dr Sharief Hendricks, and I were involved in rugby at both a research and practical level as coaches/players a couple of years ago. We both had experiences a number of coaches, parents and players who asked us questions that had already been answered in the form of scientific publications. From research that Dr Hendricks had conducted, it was obvious that it would be unlikely that coaches would read any scientific publication, so we hoped this might bridge that gap.

James and I would be happy to keep this conversation going either on the comments of this blog, or over on Twitter. Feel free to contact him directly via these Rugby Science contact details.

Thank you for your insight James!