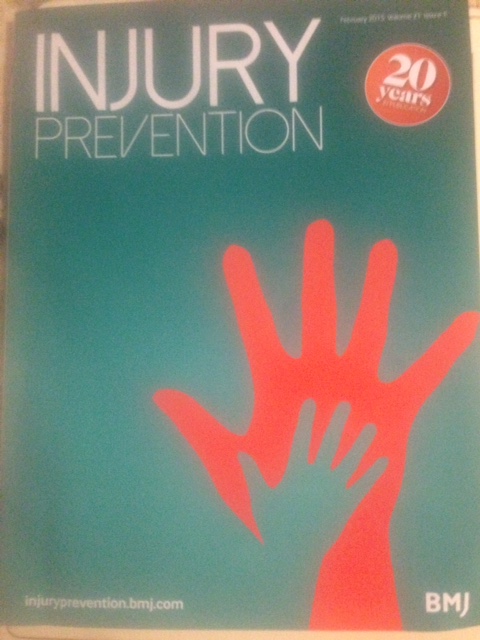 I voted for the design of the Journal’s new cover even though I was not sure why I liked it better than the alternatives. I’m pleased that whatever attracted me to it pleased others as well. But, from the start, the small green hand has puzzled me. It seemed a bit mysterious and not just because it cleverly merged into the background. I’m still not sure what it is intended to represent. The red is obvious: it is what most injury prevention messages say, “Stop; don’t go here.” Or, “Don’t do this; it’s dangerous and could cause a serious injury.” So, the red hand is no mystery. But the green hand is another matter. It could mean many things.

One thing I hope it is not intended to convey is that the Journal encourages risk-taking. I know some regard my opposition to this as foolish, but even if I’m wrong, at least I’m consistent because I’ve held this view for many years. Recently, however, some distinguished colleagues insisted that I was wrong because they were convinced risk-taking is essential for healthy child development. They even argued that risk avoidance was itself ‘harmful’. When I asked for evidence in support of these assertions they insisted that not all evidence needs to be ‘scientific’.

Respectfully, I disagree. I am not an evidence-based evangelist but I do believe that there is a clear hierarchy in the many paths to knowledge. Most scientists agree that clinical wisdom, years of experience, or the convergence of opinions from diverse disciplines is not equivalent to what we learn from disciplined, well-designed research. They (and I) believe the best evidence comes from true experiments but we accept that these are often impossible in a field such as ours. So we often resort to quasi-experimental designs. But I hope there are not many among us who would accept that ‘proof’ of a position can comfortably rest only on anecdotal accounts or personal experience.

Back to the green hand: I repeat that I trust it is not intended as a symbolic nod to those who are convinced that risk taking is essential to healthy development or even a good way to prevent injuries. Instead, I hope it is intended to say something like, ‘Follow me along this path. Evidence suggests it may be risky but it is safer than the alternatives.’ In other words, the green hand is intended to remind us that there is a middle ground. For example, some communities in the US and Canada have recently banned tobogganing on hills that were found to be extremely dangerous. I think this makes good sense. However, many of these and other communities pointed users to hills that are far less dangerous because icy patches and obstacles have been removed.

I hope the green hand is there to wave us towards safer alternatives but NOT to urge abandoning reasonable caution.

PS. I urge, beg, implore all who disagree to submit comments to this blog. Let’s liven things up and debate our views vigorously.