This week, Flaura Winston of the University of Pennsylvania shared the news post of the first ever media campaign regarding violence against women in the Kingdom of Saudi Arabia (KSA). The campaign features a veiled woman with a bruised and blackened eye, and is entitled “Some things can’t be covered.” The campaign is sponsored by the Saudi Arabian charity, the King Khalid Foundation and appears to be trying to raise awareness of violence again women. (Link to view the advertising campaign: http://www.adweek.com/adfreak/ogilvy-creates-saudi-arabias-first-major-ad-campaign-condemning-violence-against-women-14904). 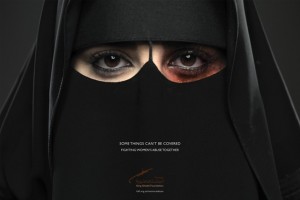 Violence against women is a global social and public health issue. Intimate partner violence, blogged by Bridie earlier this year, is the most frequent type of violence against women with a high prevalence around the world (e.g., see the World Health Organization’s fact sheet at http://apps.who.int/iris/bitstream/10665/77432/1/WHO_RHR_12.36_eng.pdf). For instance, a ten country study including 24,000 women showed that the prevalence of ever experiencing intimate partner violence ranges from 13% and 61% (Countries included: Bangladesh, Brazil, Ethiopia, Japan, Namibia, Peru, Samoa, Thailand, the former state union of Serbia and Montenegro, and the United Republic of Tanzania). The fact sheet identifies that essential steps towards tackling violence against women include, but are not limited to, the legislation, its enforcement and developing asupport system. It indicates that the mass media “edutainment” campaigns are pivotal in raising public awareness as well as guiding the victimized women to seek support.

Violence against women is not uncommon in KSA (Link to Saudi Media: http://www.saudigazette.com.sa/index.cfm?method=home.regcon&contentid=20130430163665). The survey by the National Family Safety Net showed that most Saudi women were unaware of their rights (Link: http://english.alarabiya.net/en/News/middle-east/2013/04/28/Saudi-Arabia-launches-first-anti-domestic-violence-campaign.html). KSA is a traditional society where women have fewer opportunities to contribute in economic and political activities. According to the World Economic Forum, the KSA is ranked at 131st out of 135 countries on the gender parity index (Link: http://www3.weforum.org/docs/WEF_GenderGap_Report_2012.pdf). Samar Fatany, a Saudi columnist and women rights’ advocate, pointed out that societal factors could make it difficult for Saudi Women to report violence against them.

These issues have caught the attention of the Saudi Government, which is now pursuing reforms to give more voice to women in the political system. For instance, women have now been given the right to vote and run for office in municipal elections to be held in 2015. This year, thirty women were given the membership of the country’s highest legislative body. The current media campaign, which has a focus on violence against women, reiterates that women issues are now a priority for the Saudi government. Editor: Given the traditional nature of the KSA society, it will be interesting to see whether this campaign leads to increased momentum in the country’s efforts to address violence against women such as by facilitating the creation of a reporting and support system for abused women.