My first reaction when I learned of the horrific events in Connecticut two days ago was to mourn with the parents of the children who were killed. My second reaction was to go to this computer and compose a message about gun control on this blog. That message would have said something along the lines of although far more stringent gun control is not the only answer; it is a large part of what desperately needs to be done.  Then I thought I should wait a bit to see if that was just a knee-jerk reaction even if I believed it to be well informed by the studies with which I was familiar.

Forty-eight hours have now passed and I am prepared to share my views with those who read this blog. They are virtually identical to what I initially thought: more stringent gun control is certainly not the entire solution to the crisis (and, yes, it IS a crisis) but the evidence clearly suggests it is a key element no matter what the NRA may say! At a simple level, eliminating weapons not intended for self-defense but for mass killing reduces the number of victims who can be killed in minutes. (In a terrible irony, on the very same day as the Sandy Hook shootings, there was an attack on school children by a knife wielding man in China.  There were 22 victims but – and this is the point – no deaths!)

At a far more complex level, stricter regulations, vigorously enforced will begin to shift the mentality of most Americans. I truly believe that is so just as I am convinced it is the ‘gun culture’ that lies behind so many of these killings. That, and the entirely inadequate array of mental health services to assist families who have identified  someone displaying signs of irrational behavior. This cannot be remedied at a time when so many of these services are being cut rather than being expanded.  That component can be fixed far more easily than changing the views the increasing number of Americans who oppose more stringent gun control measures.

But I am confident it can be done. It must be. Ask any parent whose child died at Sandy Hook Elementary School; ask any parent of a child in that age group; ask any parent or grandparent! As a Canadian I could smugly point to the vast difference in gun killings in Canada and the U.S. and credit our stronger gun control laws. I hesitate to do so because as a scientist I am not certain of the cause-effect direction.  Maybe we have fewer crimes because we don’t share the gun culture with our Second Amendment-loving neighbours. Or maybe we should credit our stronger laws. It is also possible that we have those stronger (but far from strong enough and clearly moving in the wrong direction) gun control laws simply because ours is a more peaceful culture to begin with. I simply don’t know which is correct.

What I do know is that my American friends share my sorrow; they must find a path to stopping these events. I am convinced stronger gun control is a key part of the answer. Until then, all we can do is continue to mourn together. 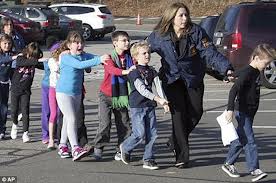 For a thoughtful, well-informed discussion of this topic I urge readers to go online and view todays episode of Meet the Press, especially watch carefully the interview with Mayor Bloomberg. He said it all, far better than I possibly can.