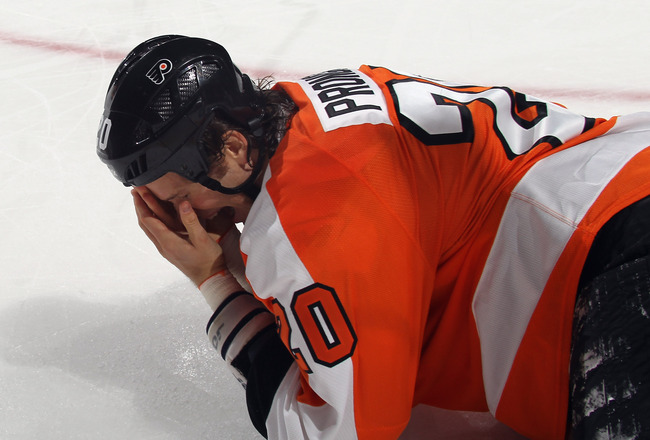 It is widely agreed that protective gear is a key to secondary prevention i.e., once a harmful force has been launched, the effect is diminished by the use of various forms of padding, shielding, etc.  Such measures are especially common in sports. Thus, professional players in most contact sports now use helmets in part because they are required to do so.  In ice hockey, where sticks and pucks can blind, visors are obligatory at all junior levels of play. Not so for the senior professionals in the National Hockey League. Last week the longstanding debate was re-ignited when an errant stick hit just below the eye of a leading player, Chris Pronger, who had refused to wear a visor. He now has blurred vision and his team will insist on a visor if and when he returns to play. In an article in the Washington Post, Katie Carrera notes that “The addition of a rule that makes visors mandatory seems simple enough” but it is evident that many will not do so until the rules require it.  Even though it makes great sense, only two general managers have publicly supported such a rule.  For one of the managers, the turning point came after seeing a player lose an eye after being hit by a deflected puck. The player’s pro hockey career was over at 20.

In the NHL, visor use has risen steadily so that now about two-thirds of players wear one.  My own favorite team, the Montreal Canadiens are something of an outlier, because all but 4 players wear visors. However, on other teams as few as half do.

The player representative on the team where the injury occurred predicted that visors will be mandatory (in 5-10 years!) but he hopes to be grandfathered so he has a choice. Then, with impeccable logic he added: “I like the freedom of not having any obstruction around my eyes, but knock on wood, you just continue to be lucky and nothing happens.”

Ironically, the previous year a team mate, Poti, had a similar experience. “There was a mirror in the trainer’s room,” Poti said. “I looked in the mirror. Both my eyes were wide open, but I couldn’t see out of the one on the right.” “He was extremely lucky,” said the team physician, who is also the president of the NHL Team Physicians Society. “With an injury like that, you worry about rupturing the globe. . . . There’s no coming back from that.” 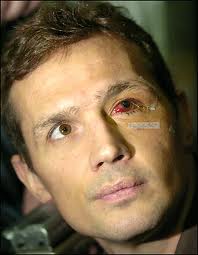 So what is the big deal about wearing a visor? After all, as noted above, most younger players wore one during their entire junior years.  When they arrived in the NHL the wiser ones continued to do so; others argued that it affected their vision.  Even if that were true, it is hard to escape the counter-argument that however much it may do so, it could not compare with the effect of a preventable eye injury. The truth of the matter for many die-hards is that they resist wearing a visor because it is not macho to do so.

A hockey writer, Patti Dawn Swansonn, put it well: “The NHL, remember, is a men’s league, and I must assume that the 30-40 percent who shun the shield represent the last of the manly men. If they want to go blind, go blind. Their choice. And never mind that there isn’t so much as a shred of logical reasoning for not wearing a visor. Oh, yes, there are many arguments against, and we’ve heard them all. How they hinder vision. How they’re heavy. How they don’t fit properly. How they fog up. How you have to wipe them every 30 seconds. Blah, blah, blah. It’s all so much macho malarkey.” Swansonn concludes “…  in time, visors for skaters will be the rule rather than the exception, because the NHL and NHLPA will pass legislation which prevents players from making the foolish decision to not wear a visor. Will that make the NHL a less-manly men’s league? Only on Coach’s Corner” (… a reference to a controversial commentator whose Neanderthal views are now regarded by many as bordering on the bizarre). 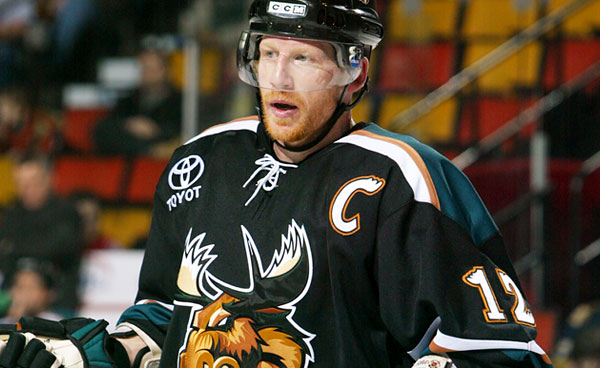 Comment: If any readers of this blog wish to support the ‘players should decide’ argument, I would love to receive their comments. Equally, if you agree with the views I have expressed, do say so.