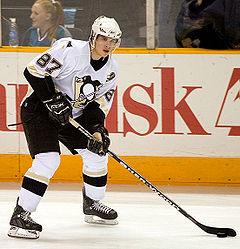 After being sidelined by 2 successive concussions for much of last season and likely some or all of the upcoming hockey season, the NHL’s star player, Sidney Crosby, has proposed rule changes that would ban all head shots, intentional or not.  He began by noting that only 50 of the possibly thousands of hits in the NHL every year, were hits to the head. “And to take those out, the game’s not going to change,” he said. “As players we’re professionals, and the odd time maybe there’s accidental contact, but for the most part we can control what goes on out there,” he continued, questioning the distinction between stickhandling rules and those covering players’ bodies. “If a guy’s got to be responsible with his stick, why shouldn’t he be responsible with the rest of his body when he’s going to hit someone? Whether it’s accidental or not accidental, you’ve got to be responsible out there, and like I said, at the end of the day, it could do a lot more good than what it’s going to take away from the game.”

Comment: I agree fully. And this issue must be considered alongside a ban on fighting which appears to have been at least partly responsible for the deaths (two from suicide) of 3 ‘enforcers’ (players hired for their ability to fight). More on this later.