Have a look at Google labs N-gram viewer. It is either a really cool bibliographic and linguistic research tool or an incredible time sink … or maybe both.

Google has digitized millions of books in English, mostly, but also in several other major languages. Single words and “n” word combinations are catalogued and described in probabilistic terms, each tracked as a percent of all recorded n-combinations in print in a given year. These values are then normalized against the total printed corpus in a year, and can thus be tracked and compared over time.

Here, for example, are the prevalence from 1900 to 2000 of “tuberculosis” (blue) “poliomyelitis” (red) and “AIDS” (green). The patterns are as you might expect. There are curious peaks in published references to TB corresponding to the first and second world wars. Polio has a modest rise in the 1960s and AIDS bursts onto the scene only after 1980. 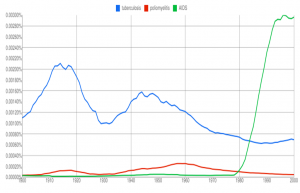 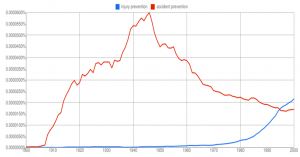 For most of the last century our work would clearly have been “accident prevention.” The use of injury prevention shows a rising trend in the late 1980s and 1990s, finally overtaking accident prevention in 1994 – just before our journal put out its first issue.

For all the effort our colleagues put into abolishing the term “accident” (I don’t even know if I am allowed to use that word on a BMJ blog ….) one would hope that “injury prevention” would be the dominant term by now. Interestingly, while this seems to be the case for English as a whole, there is a discrepancy when comparing publications in American English: 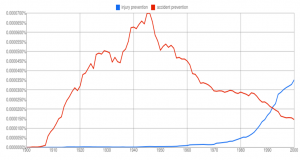 To those in British English: 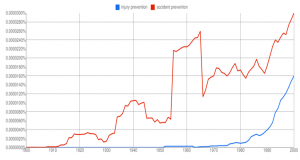 Clearly, most Britons (or, rather, published authors writing in British English) will still use – and presumably understand – the term accident prevention.

This begs the question, of course, why spend time teaching the world to speak our language? If people want to describe injury control as accident prevention, maybe that’s how we should describe it too. Just a thought.

In any case, have a look at the Google Books n-gram viewer and be sure to share any interesting (injury related) visualizations here!