Before travel restrictions and social distancing requirements were implemented in the UK in response to the Covid-19 pandemic, roughly 280 nurses and midwives from 34 countries gathered in London in early March 2020 for the 5th Commonwealth Nurses and Midwives Conference. The theme of the conference – hosted by the Commonwealth Nurses and Midwives Federation (CNMF) – leveraged the global temperament of celebration evoked by the World Health Organization (WHO)-designated International Year of the Nurse and the Midwife. Spirits were high as many attendees were also saluting Ghana’s national Independence Day (March 6), International Women’s Day (March 8), and Commonwealth Day (March 9). The conference organizers compiled a program of noted speakers and leaders to focus on how our professions are ‘breaking down barriers and leaving no one behind’ while striving for realization of universal health coverage (UHC) and the United Nations (UN) 2030 Sustainable Development Agenda. Health visitors and community-based nurses from the Bahamas and Pakistan rubbed elbows with chief nurses and executives from Belfast, South Africa, and New Zealand while discussing how to address the social determinants of health and achieve health equity for populations worldwide.

The sixth Commonwealth Secretary-General, the Right Honorable Patricia Scotland, Queen’s Counsel, opened the conference. Baroness Scotland encouraged attendees to reflect on “the almost…  intolerable strain on what seems to be already overstretched health systems” and to draw international recognition to “the truly vital place of nurses and midwives in the healthcare delivery system and to raise an alert as to the global shortage of [these professionals].”  One of her key points reflected a commitment to action that advances the pursuit of UHC and the health-related Sustainable Development Goals (SDG). She encouraged stakeholders across sectors to go “beyond issuing statements and move toward mobilizing practical support.” Baroness Scotland’s words were strengthened by her profound historical understanding of nursing’s disciplinary lineage, as she recognized the sheer courage of Mary Seacole, the innovation of Florence Nightingale, and how today’s workforce represents these ideals in the modern era. 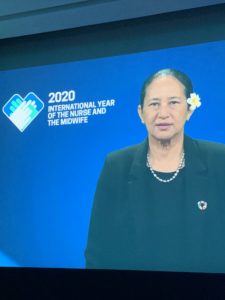 A video-recorded message from WHO Chief Nursing Officer, Elizabeth Iro, followed and praised nurses’ and midwives’ frontline response to the growing Covid-19 outbreak and international emergency and disaster management. Little did Iro know that conference participants were already doing their best to mitigate infection transmission, replacing handshaking and embracing colleagues with elbow bumps and head nods. Following Iro’s message, the International Council of Nurses Chief Executive Officer, Howard Catton took the stage. Catton seconded the courage of nurses working across nations who are “running toward the needs” of populations, confronting imminent dangers such as the recent Australian bush fires and the bombings in Sri Lanka. Furthermore, his enthusiasm in discussing the inaugural WHO State of the World’s Nursing Report was inspiring. The report, released April 7, 2020, provides a solid evidence base to drive investment in the nursing and midwifery workforce, support UHC and SDG attainment, and provide technical data describing gender, regulatory, practice, leadership, and a host of other nursing issues on a global scale. The next State of the World’s Midwifery Report will be released in 2021 and will update the evidence used in the previous 2014 report. 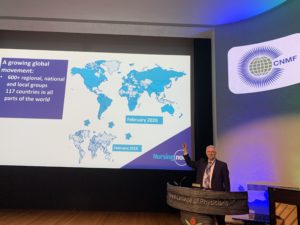 Conference participants were naturally and enthusiastically engaged by the time Lord Nigel Crisp, Co-Chair of both Nursing Now and the UK All-Party Parliamentary Group on Global Health, stood to address the audience. Lord Crisp emphasized the aim of the Nursing Now campaign to improve health globally by raising the profile and status of nursing worldwide. In actuality, it is a multidisciplinary aim. The advancement of nursing results in the improvement of the entire health team and, therefore, the enhancement of the healthcare delivery system as a whole. He pointed out the pathway for achieving UHC, including an increased number of nurse-led clinics, more specialist nurses, developing midwifery services, ensuring primary healthcare access, and emphasizing nurse leadership in health promotion and disease prevention models. Of note, Lord Crisp called for thinking globally and acting locally when he said “global stuff is global stuff but impact comes in countries” through policy change, education and employment investments, increased nurse leadership and influence, and improved recruitment and retention.

Deva-Marie Beck, founder and international co-director of the Nightingale Initiative for Global Health, addressed the main hall to deliver the closing keynote address – “Celebrating Our Heritage & History: Committing to Our Now & Our Future.” As a recognized Nightingale scholar in her own right, Beck premiered a self-compiled short film, In Florence Nightingale’s Own Words. As a  recording of  Rimsky-Korsakov’s ‘Scheherazade’ played, highlights of Nightingale’s writings faded in and out against a backdrop of emotionally stirring images of the environment and people from varied ages, genders, socioeconomic statuses, cultures, races, and ethnicities. An 1876 Nightingale quote, in particular, resonated when considered alongside the dire needs of humanity and the planet during this very fragile and uncertain time. Nightingale wrote, “To love – to help one another, to strive together, to act together, to work to the same end…” – isn’t this what is needed most today as we prioritize social justice, health equity, and adaptation and mitigation practices amid the climate crisis. Such an idea needs concrete pathways and pragmatic translation to practice NOW. This is the message that resonated at the CNMF Conference and was echoed by Deva-Marie Beck in the final presentation of the second day, who reminded us that, “We are global citizens living in a global village.” We are, indeed, in this together and we need now, more than ever, to commit to informed action that tends to the social and environmental determinants of health in order to achieve health equity.

Earlier in the conference, Lord Crisp shared that what he charges policy makers to do is to, “Look at nurses – look at nurses again… they have all the care and compassion of the past but different education [today] that gives them opportunities for greater roles and influence.” Perhaps, that reflection is a step we all must take during this celebratory 2020 Year of the Nurse and the Midwife… to look at ourselves again and again, and strategically take the steps needed to become the change makers, advocates, leaders, and policy shapers we were always meant to be.

This self-reflective task is not just an option; it is a must.