We are delighted to share with you our latest guest blog, in partnership with @WeEOLC, from Sarah Russell on the topic of dementia and advance care planning.

Sarah Russell is the Head of Research and Clinical Innovation at Hospice UK.  She is also the full time carer for her mother who lives well with Alzheimer’s.  Sarah tweets as @learnhospice, @WeEOLC and @swaydemfriend 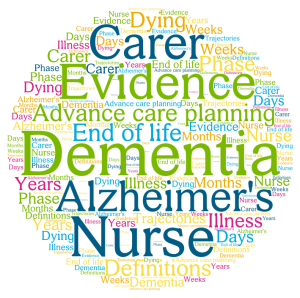 I have been a hospice and palliative care nurse for over 20 years. I love my job and am still rather surprised that I get paid at the end of the month for doing it. For twelve years I have also been a carer for my elderly parents including the last five years as a full time carer for my mother. Mum was diagnosed with Alzheimer’s shortly after she came to live with us. In hindsight, we had suspected it for a little while and confirmation although traumatic was a bit of a relief. We could now focus on living well with dementia rather than dwelling on the uncertainty of the present. I have said elsewhere http://www.ehospice.com/uk/Default/tabid/10697/ArticleId/15377/ my thoughts about being a carer.

Being a hospice nurse and carer is a mixed blessing. Sometimes I am not sure which I am. Recently, I was tweeted to ask if as a senior nurse did I still do clinical shifts. I paused before I replied because I do…but not in the hospice, hospital or care home setting. I do it at home every day. I assess, provide and manage all Mum’s care. Our home has been fitted out with equipment and devices. We have done her advance care planning, preferred place of death, Do Not Attempt Cardio Pulmonary Resuscitation (DNACPR) and ceiling of care documents. Recently I went to the funeral directors on her behalf to arrange her funeral because it was something that she wanted to get done before she died so that “she wasn’t a bother”.

So that got me thinking…

How does the evidence about dying and illness trajectories as well as phase of illness fit in with my mother’s advance care planning?

What is end of life?

There is inconsistency in definitions used in palliative and end of life care (Hui et al., 2014; Russell, 2015) and the term ‘end of life care’ is not understood in a uniform way (Shipman et al., 2008; Gott et al. 2009).The recent Care of the Dying Adult specifically focus on the last days of life (NICE, 2015). However, NHS England (2014) report that end of life could range “from a few years to a matter of months, weeks or days, and into bereavement” (NHS England, 2014:5). This is of interest when considering for most people dying begins months or years before death (Hicks, 2012). The diversity of the terms bewilder and confuse patients, family members and health care professionals (Billings, 1998; NCPC and Marie Curie Cancer Care, 2014). Living with a long term incurable illness such as dementia illustrates the challenge of end of life care. So what does the evidence have to offer?

The dying and illness trajectory literature offers us a framework for understanding end of life further. Glaser and Strauss (1966) suggested the concept of dying trajectories of ‘certain death at a known time; certain death at an unknown time; uncertain death but a known time when certainty will be established; uncertain death and an unknown time when the question will be resolved’. Illness trajectories describe various patterns of decline at the end of life e.g. cancer (short period of evident decline), organ failure (long term limitations with intermittent serious episodes) and frailty (prolonged dwindling) (Murray et al. 2005; Lunney et al. 2003).
It is argued that trajectories provide a conceptual map of a broad timeframe, patterns of probable needs and health and social care interactions towards death (Murray et al. 2005) enabling practical planning towards a good death (Murray and McLoughlin 2012). This is reflected in the phases of illness used within the UK palliative care funding review initiative (see Masso et al., 2015; NHS England, 2015).

So when to discuss advance care planning?

Death is both a social and health experience (Sudnow, 1967). Advance care planning involves imagining your future death, discussing, contemplating and sometimes making decisions about future care. There are persistent questions over the correct timing of advance care planning conversations within a person’s illness or dying trajectory. Government policy recommends that all people should engage in advance care planning (Dening et al. 2011) and there are quality standards for dementia and end-of-life care in the United Kingdom (Jones et al., 2016). However, choosing the right time to discuss advance care planning is challenging as people may live up to nine years with dementia; but advance care planning is often only carried out in the last six months of life when capacity maybe impaired (Poppe et al., 2013; Wolfson et al., 2001).

In my mother’s case, her advance care planning was and still is multiple conversations about a variety of things that matter to her. Only some of her advance care planning sits within the medical domain of decisions about the future withdrawal or withholding of medical interventions (e.g. DNACPR, hospital admissions and future antibiotics) and preferred place of death (at home). The ‘window of opportunity’ to discuss matters described by Dening et al. (2013) varies. Mum’s ability to weigh up information and make decisions fluctuates day by day and hour by hour, but she is able to make specific decisions if given time (including the right time of day) to discuss. For example, she recently completed a One Page End of Life Profile succinctly and quickly with little intervention from me (see @maxneill time line for more information on this).

So what does the trajectory and phase of illness evidence base offer to my mother’s advance care planning?

Actually quite a bit.

My mother is at the end of her life. She is in her 90’s, with multiple co-morbidities as well as Alzheimer’s. I would not be surprised if she died in the next year, months or weeks (see O’Callaghan et al. 2014). Her certain death is at an unknown time at the moment. It will hopefully be sudden (she wants to die in her sleep) but not unexpected. She is frail with prolonged dwindling. Some days are better than others, but she has had a distinct pattern of troughs and plateaus of functional and cognitive decline. Initially when she moved in with us she was in a stable phase of her illness. Symptoms and co-morbidities were controlled. More recently she become unstable with increased symptoms not 100% responsive to interventions. We tweaked medications and care and these have plateaued out again but she is not as stable as she has been in the past.

What the evidence has offered us is a way to conceptualize her end of life and have some control over how we live well with her dementia until she dies. In many ways, it liberates us. It enables me to be a nurse when Mum needs me to be and to be her daughter when I need to be one. The evidence is helping Mum to live well until she dies.

Join us for a @WeEOLC #WeEOLC tweet chat with @mariecooper100 and @GaryMitchellRN on Tuesday 1st March 2016:8-9pm to discuss dementia and end of life care.

Murray, S and McLoughlin, P. (2012). Illness trajectories and palliative care: Implications for holistic service provision for all in the last year of life. In S. K. and A. K. L Sallnow (Ed.), International perspectives on public health and palliative care (pp. 30–51).

NCPC and Marie Curie Cancer Care. (2014). End of life and palliative care: Thinking about the words we use. Retrieved from http://www.scie.org.uk/socialcaretv/video-player.asp?v=palliative-care-or-end-of-life-care

NICE. (2015). Care of the Dying Adult. Retrieved from http://www.nice.org.uk/Guidance/InDevelopment/GID-CGWAVE0694