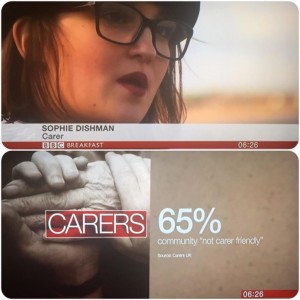 It’s a time where healthcare professionals and individuals, like myself, raise awareness of the important role that carers play.  This awareness pertains to what a carer is, what they do on a daily basis and where it is that they can go to access support services.  It’s a cause that is inherently close to my heart because I am in actual fact, a carer.  I have been since the age of 11. You might think this is young but the truth is there are carers younger than me and a lot of carers older than me.  Being very young or very old then doesn’t give you immunity from the role of caring for a loved one.  Irrespective of age or individual circumstances, we all share the same role of carer.  We look after a loved one who needs help – be it a family member, a friend or neighbor.  The people we care for may have physical or learning disability, a long term health condition, a mental health problem or even have problems with addiction.  Some carers may even fit into any of these categories themselves.  I know I do.  I have anxiety and OCD, but I continue to care for five people in my family.

I started caring from the age of 11 – it’s all I’ve ever known.  My grandma and granddad used to look after my great grandfather who had dementia and had one of his legs amputated so caring has always been in my family.  He used to live with them until he moved into care and he died in 2006.  Just before this, in 2005, my grandma fell down the stairs and this accident changed the life of my family and me forever.  Everything just spiraled downwards from that point in time. When my grandma got out of hospital, 4 months after her accident, we thought everything would just go back to normal.  It didn’t.  It was only beginning.  She was diagnosed with epilepsy and diabetes.  To make matters worse, we were told that the brain damage she had already sustained would get progressively worse.

Caring from my grandma became more difficult as I then had to play a role in caring for 3 other members of my family.  I don’t want to go into that, because it’s still so raw for me.  Not all carers want to talk, tell their story or raise awareness.  Some of us prefer to remain in silence and some people struggle alone.  While I don’t want to go into details I will say that mental health problems are involved as well as substance misuse.  There is a lot of stigma surrounding these issues and unfortunately it is not something I can discuss further.  I have been living with this aspect of caring since I was 14 years old.  My grandma eventually went into care when I was 17, I think.  It sounds terrible but my life from the age of 11 has basically been a blur of events.  From then, my granddad’s health began to decline.  He drank a lot – probably to cope with grandma’s deterioration and his health problems worsened.  Then something we weren’t expecting happened – he was diagnosed with dementia.  The dementia caused a number of hospital admissions and eventually changed his personality and behaviour.

In September 2014, it was time for me to move away from home to go to university.  I left my physical caring responsibilities at home, but I would still be the person at the end of the phone if anything happened to anyone.  My family was always in my thoughts and that caring responsibility never went away.  When I went back home, my caring responsibilities would resume immediately. The last time I went back, which was for my 21st birthday, everything seemed good but my grandma was experiencing hallucinations and my granddad’s dementia had progressed rapidly.

He was now in psychiatric care.  I went to see him on the day of my birthday and when I saw him, I didn’t recognize him.  He had completely changed.  He didn’t know who I was, which was difficult. He was very distressed because he couldn’t communicate what he wanted and he didn’t have the capacity to hold a conversation with me.  I couldn’t believe what I was seeing.  The feelings I experienced were crushing, will he be able to speak, go to the bathroom himself or recognize anyone again in the future?  He’s only 67 years old.

Caring can be difficult and heartbreaking.  But to be able to give back to my family, the same family who cared for me growing up, is a very rewarding feeling.  There is a considerable burden on my life at times but I wouldn’t change anything.  I know that the people I care for will not always be around and so I enjoy the time I have with them the best that I can.  As a person I have become more caring, more able to adopt a non-judgmental approach and learned how to be resilient.  On caring, I would say – It’s the gift of giving back that counts.