Use of resuscitation fluids has largely been based on physiological principles rather than evidence.

The debate over when to use crystalloids versus saline in unwell adults shows there has been considerable uncertainty about what to do in practice. Use of resuscitation fluids has largely been based on physiological principles rather than evidence.

However, two recent trials in the New England Journal of Medicine try to answer this long-standing question (I think I can trace this question back to my medical school days) over the use of crystalloids or saline in Noncritically and critically ill adults.

The first of these trials assessed balanced crystalloids or saline in 13,347 NonCritically ill adults managed outside an intensive care unit. The trial used a multiple-crossover design to assign patients within the whole of one emergency department each month to either balanced crystalloids (lactated Ringer’s solution or Plasma-Lyte A) or saline.

The primary outcome of hospital-free days was no different between the groups. There was a lower incidence of major adverse kidney events within 30 days in the balanced crystalloid treatment phase (4.7% vs. 5.6%: absolute difference 0.9%, NNT 111, p =0.01). This effect was largely driven by doubling of creatinine and not the need for Renal replacement therapy. As to costs, one litre of saline costs about $1 dollar,  balanced crystalloids work out to be about roughly double.

So which one to choose? The evidence points to small but critical differences with balanced crystalloids. However, to confirm this decision we need a trial that blinds clinicians to the allocated intervention, a crucial methodological limitation of both trials. 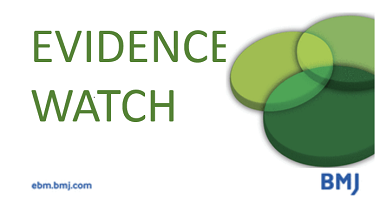 Carl Heneghan is Professor of EBM at the University of Oxford, Director of CEBM and Editor in Chief of BMJ EBM

Carl has received expenses and fees for his media work including BBC Inside Health. He holds grant funding from the NIHR, the NIHR School of Primary Care Research, The NIHR Oxford BRC  and the WHO. He has also received income from the publication of a series of toolkit books published by Blackwells. CEBM jointly runs the EvidenceLive Conference with the BMJ and the Overdiagnosis Conference with some international partners which are based on a  non-profit model.