The Greek preposition μετα had several meanings, depending on whether it governed the accusative, genitive, or dative case. With the accusative it meant coming into or among, in pursuit of, or coming after in place or time; with the genitive it meant in the midst of, between, or in common with; and with the dative it meant in the company of or over and above. It was also used as a prefix, expressing such notions as sharing, being in the midst of, succession, pursuit, reversal, and (most commonly) change. Examples of the last include metabolism, metamorphosis, and metaplasia.

In scientific English its uses include “consequent upon” (as in the obsolete terms meta-arthritic, metapneumonic), anatomically “behind” or “beyond” (metabranchial, metacarpal, metaphysis), “coming later” (metaphase, which comes after prophase in the cell cycle), or “changing” (metachromasia, a property of materials that stain a different colour from the stain used). In geology meta– distinguishes various types of metamorphic processes. And chemists use it to differentiate certain metameric chemical compounds (for example metacresol, paracresol, orthocresol).

In about 40 BC, some 280 years after Aristotle’s death, Andronicus of Rhodes catalogued his manuscripts in the order we know today. One set of papers, those dealing with natural science, he called The Physics (τὰ φυσικά), and the next set The Metaphysics (τὰ μετὰ τὰ φυσικά), simply because it came after The Physics. However, because The Metaphysics dealt with what Aristotle called “primary philosophy” or ontology, to be taught after natural philosophy, metaphysics came to mean “the science of that which transcends the physical”.

In the early 17th century meta– was used to designate any higher science (actual or hypothetical) that dealt with more fundamental problems than the original science itself. John Donne, for example, wrote about metatheology. However, this usage did not become really popular until the middle of the 19th century; examples include meta-ethics and meta-history (Table 1). 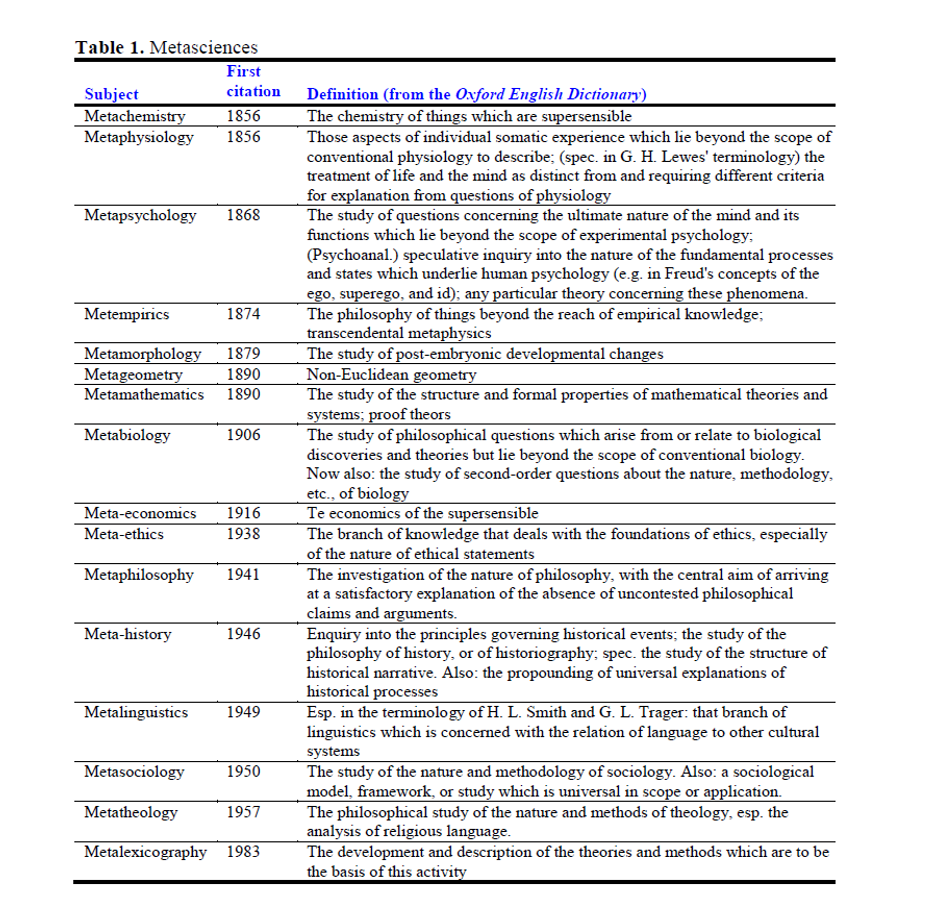 Then, from about 1940, meta– came to designate concern with basic principles. A metacriterion is a criterion that defines criteria. A metatheorem is a theorem about theorems. A metalanguage is a language that supplies terms for analysing a language; a metametalanguage does the same for a metalanguage. [But a metaphysician is not a doctor’s doctor.]

Mantissa, a medical novel by John Fowles, is metafiction; Francois Truffaut’s film La Nuit Amercaine is metacinema, and several paintings by Magritte, notably La Condition Humaine, are meta-art, as are Jean Tinguely’s machine-like sculptures, which he described as “metamechanical”. In John Cage’s metamusical piano piece, 4′33″, a pianist sits at the piano for the time indicated and does nothing, emphasizing the non-silent nature of silence; its 273 seconds represent –273°C (absolute zero, or near enough).

Martin Gardner stepped down from the Scientific American at the end of 1981, after contributing monthly articles for 25 years under the general title “Mathematical Games”. He was succeeded by the computer scientist Douglas Hofstadter, who anagrammatically called his series “Metamagical Themas”. Hofstadter explained that “Metamagical means ‘going one level beyond magic’. … The magical thing about magic is that what lies behind it is always non-magical … magic often lurks where few suspect it [and] seldom lurks where many suspect it.”

Much magic lurks in meta-analysis, analysis of analyses, preferably based on data from a systematic review, in which sets of previously published (or unpublished) data are themselves subjected as a whole to further statistical analysis.

Some elide meta– with –analysis, forming “metanalysis”. David J Finney, in a 1995 article “A statistician looks at met-analysis”, cited the Oxford English Dictionary in support: “Meta–, before a vowel normally met–”. But the important word here is “normally”, and in any case the dictionary’s advice has since changed; it now says “Where the second element begins with a vowel, or h followed by a vowel, either the final a of meta– is lost, … or it is retained, with a hyphen being usual in the written form.” “Meta-analysis” is preferable to “metanalysis”, first because it avoids confusion with metanalysis (“The reinterpretation of the form of a word resulting in the creation of a new word”), and secondly because it is used overwhelmingly more often; searching PubMed (Figure 1) I found 130 670 instances of meta-analysis as a textword (the earliest in 1977 by Smith and Glass) compared with only 169 instances of metanalysis (the earliest in 1988).

“Meta-analysis” first appeared in the philosophical literature in 1953, meaning “Analysis of the grounds and assumptions on which a theory, explanation, or account is based.” But its main use today is in its statistical sense. As Gene Glass wrote “The term is a bit grand, but it is precise and apt.”