Over the last two decades, advancements in medicine and biomedical research have been vastly improved thanks to the continuous increases in computer processing.

As we begin to enter an age of personalised healthcare, dependent on genomics, individual physiology and pharmacokinetics the need to take huge amounts of data and process it in a format for clinical use will become more urgent. Quantum computing may be our best tool for achieving this.

The computer you are using today processes information using a series of sequential 1’s and 0’s or ‘bits’. A quantum computer (QC) takes advantage of an usual observation in quantum physics which means that a single bit can be both a ’1’ and a ’0’ at the same time – also known as a quantum bit or ‘qubit’. Thats a bit crazy right? How can something be two states at the same time? Well it gets stranger – when a qubit is observed it will resolve to either a ‘1’ or a ‘0’, which means you only ever see a single state (almost as if the universe knows we are watching it). 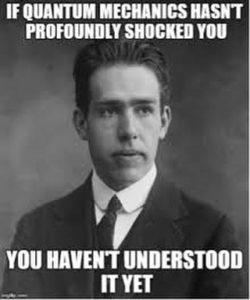 If all this is going over your head don’t worry, quantum physics is hard to digest even for the brightest minds, and much of what is happening now is still research.

I highly recommended watching this video to get an idea of how this superposition concept works with electrons:

What is important to understand here is that by taking advantage of this ‘superposition’ principle we can essentially trick the universe into creating a super powerful computer capable of processing multiple pieces of data all at the same time! That basically means we can process allot of more in a fraction of the time and start finding ways of applying huge amounts of data in real-time.

For those still with us I found the following video by Kurzgesagt to be a delightful of helping to get my head around QC’s:

Radiation therapy is the most widely-used form of treatment for cancers. Radiation beams are used to destroy cancerous cells or at least stop them multiplying. 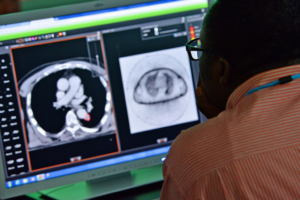 Devising a radiation plan is to minimise damage to surrounding healthy tissue and body parts is a very complicated optimisation problem with thousands of variables. To arrive at the optimal radiation plan requires many simulations until an optimal solution is determined. With a quantum computer, the horizon of possibilities that can be considered between each simulation is much broader. This allows us to run multiple simulations simultaneously and develop an optimal plan faster 1, 2.

Molecular comparison is an important process in early-phase drug design and discovery. Today, companies can run hundreds of millions of comparisons on classical computers; however, they are limited only to molecules up to a certain size that a classical computer can actually compute. As quantum computers become more readily available, it will be possible to compare molecules that are much larger, which opens the door for more pharmaceutical advancements and cures for a range of diseases.

This has the potential to save years of development time and billions of dollars required to bring a drug to market 3.

Quantum computing allows us to model complex molecular interactions at an atomic level. This will be particularly important for medical research and drug discovery. Soon, we’ll be able to model all 20,000+ proteins encoded in the human genome and start to simulate their interactions with models of existing drugs or new drugs that haven’t been invented yet 4, 5.

There is a growing trend of applying machine learning to aid with patient diagnostics. Much of machine learning is about “pattern recognition.” Algorithms crunch large datasets of patient information to find signals in the noise, and the goal is to leverage comparisons made to help identify a diagnosis. 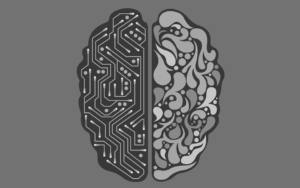 With quantum computing, we’ll be able to do this processing orders of magnitude more effectively than with classical computing. Quantum computing will allow doctors to compare much, much more data in parallel, simultaneously, and all permutations of that data, to discover the best patterns that describe it.

This will lead to fundamentally more powerful forms of AI much more quickly than we expect. 4, 5

Using a method known as the bio-barcode assay, we can now detect disease-specific “biomarkers,” in our blood using gold nanoparticles, which are visible using MRI technology and have unique quantum properties that allow them to attach to disease-fighting cells. These gold nanoparticles are completely safe for human use. This method is also cheaper, more flexible, and more accurate than conventional alternatives.

Mikhail Lukin, a physics professor at Harvard, is also working on manipulating nanoscale particles of diamond for similar purposes. He hopes to eventually use diamond particles, to take images of human cells from the inside and detect disease without exposing patients to radiation. It seems he has already managed to do this to detect neural activity 6, 7.

Quantum sensors can also improve MRI machine’s by allowing for ultra-precise measurements. Quantum-based MRI could be used to look at single molecules or groups of molecules instead of the entire body, giving clinicians a far more accurate picture. 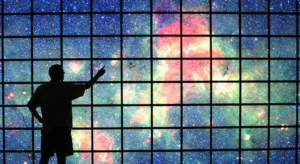 )ther quantum-based techniques are also being developed to treat diseases. For example, gold nanoparticles can be “programmed” to build up only in tumour cells, allowing for precise imaging as well as laser destruction of the tumour, without harming healthy cells.

People want to protect their health data for obvious reasons, so it’s important to consider all the ways that it can be hacked.

ID Quantique is a company using the strange quirks of quantum phenomena to protect our data in an ultra-secure fashion. Using quantum entanglement in one of the most practical applications of the phenomenon to date, quantum cryptography prevents data from being viewed by anyone other than the intended recipient.

Innovations built on the principles of quantum mechanics hold the potential to affect health care on nearly every level, from diagnosis and treatment to data storage and transmission 7.

Techniques such as laser microscopy that is built on the principles of quantum mechanics 8. And using quantum computers, we can more quickly sequence DNA and solve other Big Data problems in health care. This opens up the possibility of personalized medicine based on individuals’ unique genetic makeup.

Proteins are the basic building blocks of life. Malfunction of a given protein is frequently due to its being wrongly folded.

While the chemical composition of proteins is quite well known, their physical structure is much less well understood. Obtaining more detailed knowledge of the way proteins are folded can help lead to the development of new therapies and medicines.

A quantum computer will in theory be able to simultaneously test a huge number of possible protein fold structures and identify the most promising ones 1.

Quantum mechanics is a field of science which is inherently astounding, and computing capabilities offered by it is just the tip of the iceberg.

I hope this has been a useful introduction… 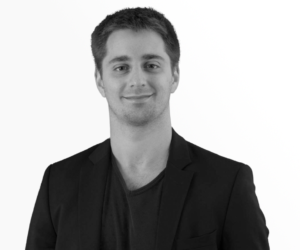 Dr Adrian Raudaschl is a medical doctor turned product manager. While working in the NHS (National Health Service) he created apps and games to help patients learn more about medical conditions. This demonstrated to Adrian the power great tools have to help people in times when they need it most. Currently he works with children, parents and healthcare professionals to create exciting medical apps and games, which both educate and delight users. Dr Raudaschl is a firm believer in the accessibility of medical information for everyone.