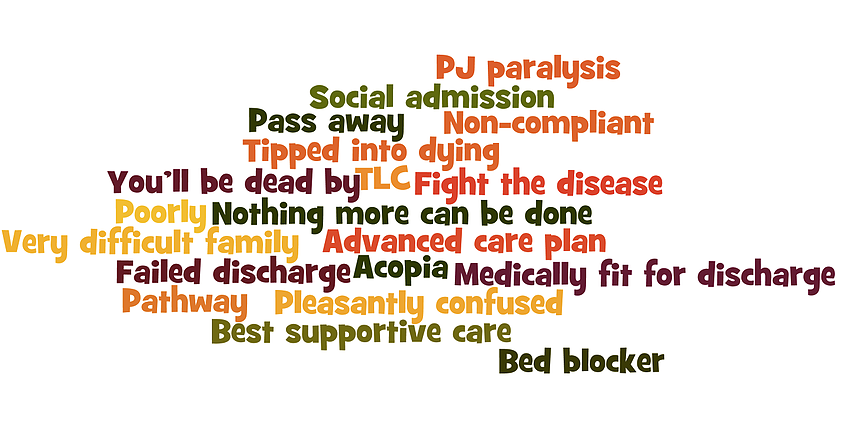 When The Adventures of Huckleberry Finn was first published, readers were not much disturbed by Mark Twain’s use of the n-word, let alone ‘injun’, terms that have been replaced by slave and Indian in the latest versions. Back then, profanity and public morality were hotter issues and they would have found today’s scrutiny of those terms curious. We are all guilty of using a patois that we have acquired in our jobs, often handed on to us by our seniors and long-established colleagues. Indeed these turns of phrases are so commonplace that there is an ever growing list known to journalists far and wide; there are examples in book form, as well as frequently updated phrases, and an ever on-going debate on clichés and jargon on twitter ( for example: https://twitter.com/johnrentoul). This is – as you can imagine – not a new phenomenon and we all can quote examples of eye-rolling management speak.

But the term pejorative language refers to words and phrases that hurt, insult, or disparage someone or something. Also called a derogatory term or a term of abuse. The label pejorative (or derogatory) is sometimes used in dictionaries to identify expressions that offend or belittle a subject. Nonetheless, a word that’s regarded as pejorative in one context may have a non-pejorative function or effect in a different context.

Some see banned words and phrases as a sign of an ever-increasing political correctness society, others point out the offence that has been caused. Take the often used description ‘anti-ageing’ in cosmetics. You have heard it frequently, but did you ever think that perhaps older people may find it challenging and off-putting?

A list of verboten ‘bon mots’ listed on a whiteboard in a Welsh hospital circulated on Twitter recently, which had specific relevance to the specialty of palliative care. Whether we can agree on a definitive list remains to be seen – that’s for the comments section below. But it is a core set to get us started and a visual summary of ideas collated so far.

The themes that emerged were euphemisms for death or dying like “pass away” or “pass on”. Phrases like “nothing more can be done”, or “they lost the fight” were also scrutinized. Spelling errors like the extra ‘d’ that some people add at the end of ‘advance’ in Advance Care Plan were seen as minor irritations that distort the true meaning of a phrase.

The language we use day to day in medicine was put in more spotlight in a recent TEDX talk  by Dr Mark Taubert. We try to select our words carefully and sensitively – or at least should do within the specialty – which is to say we recognise the need for careful phrasing of uncertainty, prognostication, and deterioration, “while fostering hope”. Equally we cannot control the public perception or media interpretation of what we do; the word “pathway”, and all of its connotations, has stayed around to haunt us. We rarely use the term in our local settings and now have strong feelings about its use in any context in relation to dying and death. Words evoke emotions, whatever the logical side of our brain tells us about the dictionary definition.

Phrase that made the abovementioned list include: ”the patient is poorly”, “social admission”, “bed blocker”, and is “not coping” or the non-word “acopia”. These terms are judgment laden and do not necessarily add useful information to the user or the recipient. Even if they serve as a form of professional shorthand, they are usually woefully inaccurate and obscure a person’s experience. The lack of objective outcome measures perhaps compounds our ability to convey this.

In summary we should all expect “best supportive care” whatever the diagnosis or stage of illness, even when a full recovery can be expected. It should not require a room full of professionals at the MDT (multidisciplinary meeting) to decide on this, especially in the absence of the patient themselves. It should certainly not imply that “nothing more can be done”. What the ‘banned phrases’ list does is challenge how we articulate what palliative care does and how we talk about patients in perhaps a more respectful way, rather than describe them as “the ovarian in bed 14.”

End note: if you want to find out more about the visual summary of ‘banned phrases’ and how to create your own, see the Twitter discussion initiated by Dr Mark Taubert and the resulting blog and graphics by Dr Erica Borgstrom.