We all want to make coming to hospital a pleasant and memorable (but not for the wrong reasons!) experience for children. It changes the way we act, the way we talk, and the amount of cuddly toys we attach to our stethoscope whilst the infection control team have their backs turned… We also adjust the environment, making it colourful and full of decoration and art. We have play therapists to provide distraction from the clinical aspects. We make sure kids can be with their families. But, does it change the way we dress? Should it?

In this month’s EMJ Supplement, a short but colourful article by Jillian Boden, Sian Butterworth and Graham Roberts – all paediatricians out of Portsmouth and the Isle of Wight. In order to assess whether children have a preference over what a doctor wears, they took two sets of photos of a male and female wearing different clothing that you might see on a jaunt around the hospital. The five modes of dress were a suit (and tie), officewear (smart casual with a collared shirt and smart trousers but no jacket), blue scrubs, colourful fun scrubs (think cheesy 90s kids TV), or the good old-fashioned white coat (short-sleeved of course).

They showed these photos to around 100 children aged 4-10 years old attending outpatients at a district general hospital and asked them to pick their favourite, as well as the one that met key descriptors such as ‘friendly’ or ‘scary’. The team found that children overall preferred their doctor to wear blue scrubs and found this outfit the most friendly and least scary. Not surprisingly, the suit took the ‘clever’ vote. Interestingly, however, fun scrubs were perceived to be scary by just over 20% of the children surveyed. To be fair the scrubs chosen had some quite bright yellow trousers and I can see how the kids could have been concerned – it looked like the doctors had just come back from staffing a holiday club in Hawaii!

The authors concluded that blue scrubs should be considered as uniform policy to ensure children are kept comfortable in the hospital environment. Of course this study appears to have been done in a district general hospital on the south coast, and it would be interesting to see if these views align with children in other parts of the country.

But why do children have such views on how doctors dress? Do they go completely on the outfit itself and how it makes them feel? Are they recalling those doctors they liked and didn’t like? Or are there other cultural considerations, such as who they look up to during their daily TV viewing?

If we look at doctors on television who appeal to a younger audience, it’s a bit of a mix. Doc McStuffins rocks the white coat, Dr Ranj generally goes suit or white coat, Dr Chris and Dr Xand of Operation Ouch wear blue and green scrubs, and Dr Brown Bear of Peppa Pig fame has either painted his body blue, or is in some kind of blue onesie. It’s such a mix! 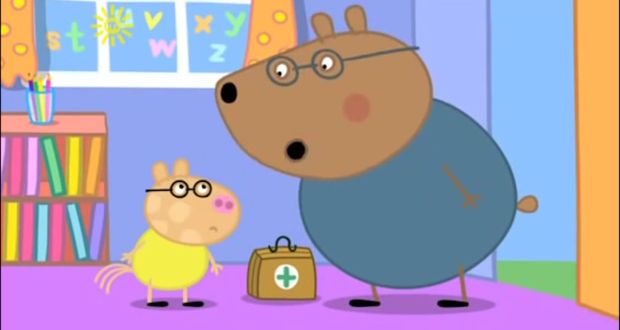 Maybe what we can take from this is how kids rate TV doctors? A good article to read this month so don’t forget to read the supplement!

How about your hospital? What do you wear in your paediatric ED? In the children’s ward? What’s your experience? Let us know.

A young girl with fever and atypical rash

Primary survey: Highlights from this issue