Subscribe to the European Journal of Hospital Pharmacy blog blog feed here.
Either copy this feed address and paste it into your news reader software or click the relevant one-click subscription button:

The European Association of Hospital Pharmacists (EAHP) extends its warmest congratulations to its past President Dr Roberto Frontini on receiving the prestigious Donald E. Francke Medal at the annual Mid Year Clinical meeting of the American Society of Health System Pharmacists. The award was presented in honour of his international efforts to promote medication safety and improve patient outcomes.

END_OF_DOCUMENT_TOKEN_TO_BE_REPLACED

On announcing the team of Commissioner designates he wanted to include in his Commission team for 2014-19, Juncker included a controversial proposal to shift the responsibilities for pharmaceutical regulation and medical devices away from the Directorate General for Health (DG SANCO), and to place these roles into the Directorate General for Enterprise and Industry (DG ENTR).

EAHP joined with European associations representing community pharmacists (PGEU), doctors (CPME, UEMS) and dozens of patient and consumer organisations in calling the proposals misguided and seeking reversal of the suggestion. The 28 organisations believe that the public health focus and imperative in relation to pharmaceutical regulation and oversight could be lost, with DG Enterprise’s prime responsibilities being to commercial interests rather than public health.

Dates for hearings between the designate Commissioners and the European Parliament have now been scheduled, with Mr Andriukaitis appearing before the Parliament’s Health Committee on 30th September and Ms Bienkowska meeting with the Industry and Internal Market Committees on 2nd October.

EAHP and partners will brief MEPs on key topics of health concern in advance of the hearings in order that relevant issues tot he European hospital pharmacy profession may be raised and highlighted.

The European Commission is appealing to stakeholders to respond to a public consultation on their Green Paper on mobile health. They especially seek comment on the barriers that are preventing the full potential of mobile health from being unlocked. The deadline for responses is 3 July 2014.

Topics of consultation include:

EAHP member associations will discuss potential policy in the area of mHealth at its General Assembly in Sofia in June, and make a response reflecting the agreed points from members at that meeting.

This information was originally published on the EAHP website. More detail can be found here

The 19th Congress of EAHP began today with a key note speech from Professor Daan Crommelin,  scientific director of the Dutch Top Institute Pharma in Leiden also Professor at the Department of Pharmaceutics at Utrecht University. However before the speech began the delegates were treated to a performance from a local flamenco troupe to immerse everyone in the culture of this years host city, Barcelona. 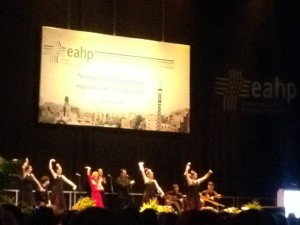 Professor Crommelin will be summarising his speech and expanding on a few of the key points in a podcast for the journal which will be published on the homepage soon.

This post has no comments.
Posted in In the news