Subscribe to the Diabetes blog blog feed here.
Either copy this feed address and paste it into your news reader software or click the relevant one-click subscription button:

Researchers in Vienna have made a breakthrough with synthetic bile acids in the treatment of primary sclerosing cholangitis. These compounds could feasibly be of use in fatty liver and diabetes – but would require further study.

“Bile acids are not only involved in the secretion of bile fluids and fat digestion, but also have hormone-like effects, particularly on the regulation of fat and glucose metabolism in the liver. Researchers at the MedUni Vienna are currently also investigating what role these effects of Nor-Urso [norursodeoxycholic acid] and other bile acid derivatives play in the treatment of fatty liver, diabetes, fat metabolism problems and arteriosclerosis and how they could replace current conventional treatment methods and drugs.” http://www.meduniwien.ac.at/homepage/news-and-topstories/en/?tx_ttnews[tt_news]=3258&cHash=35e4b2cd38

This news is interesting and it reminds us of the strong link between diabetes and the liver. What is this relationship and what are the implications for clinical practice?

The liver plays an important role in the regulation of glucose homeostasis. This helps explain why glucose intolerance is a feature or complication of chronic liver disease and cirrhosis.

Liver disease associated with diabetes mellitus can be divided into three groups as shown below [1]:

Hickman et al. have used the term “hepatogenous diabetes” to describe the association between cirrhosis and impaired glucose metabolism [2]. Up to 96% of patients with cirrhosis have diabetes or glucose intolerance in one report – and this diabetes is different from type 2 diabetes because it occurs in the absence of standard risk factors of type 2 diabetes such as age, body mass index and family history of diabetes [2,3]. This is the reason for the need for new terminology for form of diabetes. In one study, prevalence of diabetes was much higher in Hepatitis C virus-related cirrhosis and alcoholic liver disease, but not in cholestatic liver disease suggesting the important role of underlying cause in the development of diabetes in these patients [4].

Chronic hepatitis C virus infection (HCV) is associated with an increased risk of type 2 diabetes, risk being 3 fold higher in patients above 40 years of age in NHANES [1]. There is conflicting evidence of increased risk of type 2 diabetes in patients with chronic hepatitis B infection (HBV). Grimbert et al. had shown that type 2 diabetes development was 2.7 times more common in patients with HCV as compared to patients with HBV and alcoholic liver disease [1,5]. There may be a direct causative role of HCV in glucose intolerance and proposed mechanisms are direct interference with insulin signaling by some genotypes like type 1 and direct or autoimmune damage to beta cells by the virus [1]. Also antiviral therapy such as pegylated interferon alpha used in treatment of chronic hepatitis may predispose to the development of hyperglycemia and type 1 diabetes [6].

This raises some important questions:

Would you screen every patient with cirrhosis for glucose intolerance and by which method?

Does management of diabetes in patients with chronic liver disease or cirrhosis have any impact on survival or the course of cirrhosis?

Management of hyperglycemia in people with cirrhosis is also challenging because many oral drugs are contraindicated in such patients and insulin will be associated with higher risk of hypoglycemia [6]. Similarly monitoring by glycated hemoglobin HbA1c will not be reliable in these patients and much emphasis will be laid on self monitoring of blood glucose in patients with cirrhosis and chronic liver disease [7].

Researchers from Barcelona have just published a paper detailing their more than 4-year experience of treating Type 1 Diabetes with a single intramuscular injection. The technique transfers the glucokinase (GCK) and insulin (INS) genes to the host using a viral vector.

“We previously demonstrated that it is possible to generate a “glucose sensor” in skeletal muscle through co-expression of glucokinase (Gck) and insulin (Ins), increasing glucose uptake and correcting hyperglycemia in diabetic mice. Here, we demonstrate long-term efficacy of this approach in a large animal model of diabetes. A one-time intramuscular administration of adeno- associated viral vectors of serotype 1 (AAV1) encoding for Gck and Ins in diabetic dogs resulted in normalization of fasting glycemia, accelerated disposal of glucose after oral challenge, and no episodes of hypoglycemia during exercise for >4 years after gene transfer. This was associated with recovery of body weight, reduced glycosylated plasma proteins levels, and long-term  survival without secondary complications.” [1]

In this study the dogs did not have autoimmune Type 1 Diabetes. Instead they had been given drugs toxic to their pancreatic beta-cells to induce diabetes. The gene transfer creates a ‘glucose sensor’ in skeletal muscle. 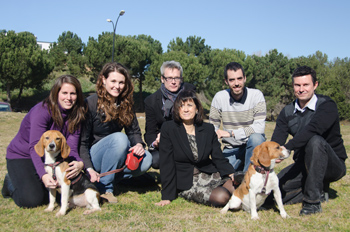 “The therapy is minimally invasive. It consists of a single session of various injections in the animal’s rear legs using simple needles that are commonly used in cosmetic treatments. These injections introduce gene therapy vectors, with a dual objective: to express the insulin gene, on the one hand, and that of glucokinase, on the other. Glucokinase is an enzyme that regulates the uptake of glucose from the blood. When both genes act simultaneously they function as a “glucose sensor”, which automatically regulates the uptake of glucose from the blood, thus reducing diabetic hyperglycemia (the excess of blood sugar associated with the disease).”  UAB press release Feb 2013.

The researchers now propose an experiment on pet dogs with Type 1 Diabetes.

They also point out the historical similarities with the discovery of insulin in 1922 by Banting and Best and the recent success of viral vector technologies in humans (in haemophillia B [2] and Leber’s Congenital Amaurosis [3]) all of which followed work on dogs.

This post has 2 comments.
Posted in Gene therapy, Type 1 Diabetes