The two other winners – a revision game for medical students to compete with each other using BMJ OnExamination data, and an Open Access Button that creates a “map of frustration” each time a reader hits a journal article paywall, have also generated a fair degree of attention. This BMJ article explains more.

But what of the other 10 projects? Four more idea were deservedly singled out for “honourable mentions” by BMJ chief executive Tim Brooks and his fellow judges.

END_OF_DOCUMENT_TOKEN_TO_BE_REPLACED

The launch of Mozilla’s Science Lab last week is a departure from the kind of projects that the ‘open source‘ advocating organisation usually involves itself with. The initiative is designed to bridge the gap between the open web community and scientific researchers, so that they can share ideas, tools and best practices on how the web should be used to solve problems and improve research techniques.

Mozilla’s mission statement for the Science Lab puts forth the goal of increasing the adoption of the internet and related technologies within different branches of science.

Even though the web was invented by scientists, we still have not yet seen it change scientific practice to nearly the same extent as we’ve seen in other areas like media, education and business. For all of the incredible discoveries of the last century, science is still largely rooted in the ‘analog’ age. Credit systems in science are still largely based around “papers,” for example, and as a result researchers are often discouraged from sharing, learning, reusing, and adopting the type of open and collaborative learning that the web makes possible.

END_OF_DOCUMENT_TOKEN_TO_BE_REPLACED

Since 1840, BMJ has been a trusted voice in the development of improved healthcare. We are proud of our heritage but also believe in looking forward. Our objective remains to support medical professionals and organisations in continuously improving the delivery of quality healthcare. By sharing our information, analytical tools and technology during an upcoming hack day (6-7 July), BMJ seeks to help healthcare professionals and organisations improve the care they provide. 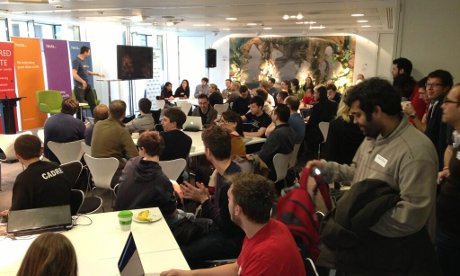 END_OF_DOCUMENT_TOKEN_TO_BE_REPLACED

“Publishing articles without making the data available is scientific malpractice”

This week has seen a flurry of activity on Twitter owing to a series of separate but related events highlighting trends in scholarly communication and research data. The fun kicked off with Wednesday’s ‘Now and Future of Data Publishing’ event organised by the Jisc Managing Research Data programme. It was followed on Thursday by the  ORCID Outreach Meeting, Getting Credit for Your Work: A Symposium on Research Attribution (jointly organised by Dryad and ORCID) and concludes with today’s Dryad Membership Meeting.

An obvious but important message that underpinned discussions on all three days was the importance of sharing data.  On the first morning, Simon Hodson of Jisc quoted Geoffrey Boulton of the Royal Society (who have made sharing data a condition of publication): “Publishing articles without making the data available is scientific malpractice.” This is an extreme but not uncommon view.

Trish Groves, deputy editor of the BMJ, recently wrote a summary of recent and future developments around sharing clinical data. The big news our end is that we now require authors of drug and devices trials to deposit their anonymised patient level data—on reasonable request. However, our interest in data publication started back in 2009 when we first incorporated data sharing statements into all BMJ research papers. More recently, we have encouraged our authors to deposit their data in Dryad and the first article to link through to a Dryad dataset was published by BMJ Open in 2011. We now have just under 40 papers with links to datasets on Dryad. END_OF_DOCUMENT_TOKEN_TO_BE_REPLACED

Elsevier reveals new layout for Article of the Future

The Article of the Future project is Elsevier’s “never-ending quest to explore better ways to create and deliver the formal published record”.

In the latest phase of this ‘quest’, the project team have worked with more than 150 researchers, authors, publishers and editors to come up with multiple prototypes for a new article design, with each one tailored to a specific subject area.

Following previous changes to improve in-article navigation and readability, all ScienceDirect articles have now been transformed using an interactive HTML5 format. Click here to see one in action.

END_OF_DOCUMENT_TOKEN_TO_BE_REPLACED

BrainSpace, a potential solution to outdated search technology, was demonstrated at this year’s SpotOn London. Launched by PureDiscovery, a big data startup, its goal is to let users find information that matters without having to actually look for it. Instead, the technology is designed to bring data directly to the user.

BrainSpace is already well-established in the world of archived content; it powers semantic search across more than 350 million documents for LexisNexis. PureDiscovery, however, has set its sights much higher. By not only determining relationships between documents, but also between between people, and people and documents, it is gearing up to create a ‘social brain’ which will revolutionise search. END_OF_DOCUMENT_TOKEN_TO_BE_REPLACED

The website Scribd describes itself as the “world’s largest online library,  a place to read, publish, and share written documents.”

In March this year Peter Doshi, a post doctoral fellow at Johns Hopkins University, sent the BMJ a link to a page displaying corresondence with the US Food and Drug Administration, urging it to investigate CellTexTherapeutics Corporation and RNL Bio.

Doshi wondered if the BMJ might be interested in launching a similar online campaign as part of its drive to persuade drug companies to publish the full data from clinical trials. END_OF_DOCUMENT_TOKEN_TO_BE_REPLACED

This post has no comments.
Posted in bmj.com, Data sharing

ORCID: an end to author ambiguity?

Publishers face authorship issues on a daily basis. Who should be listed as an author? How can an author role be appropriately acknowledged? How can we discern author responsibility? Linked to this is conflict-of-interest reporting: who needs to report what, and in what context?

A registry that will grant scientists a unique identifying number, helping readers of the literature to distinguish between authors with similar names, launched this week. ORCID, the Open Researcher and Contributor ID, seeks to remedy the systemic name ambiguity problems seen in scholarly research by assigning unique identifiers linkable to an individual’s research output.

END_OF_DOCUMENT_TOKEN_TO_BE_REPLACED

Plum Analytics: a new player in the field of altmetrics?

The “publish or perish” model of the academic world has followed a similar pattern since the middle of the last century. It generally takes around seven years from the conception of an idea, to the publishing of a paper, to the point where a critical mass of citations are formally gathered around it.

“Clearly the world moves much, much faster than that now,” argues Andrea Michalek, co-founder of startup Plum Analytics, with researchers posting slides online about their work even before it’s published, and tweets mentioning those discussions and linking back to the content. “All this data exhaust is happening in advance of researchers’ getting those cited-by counts,” she says, and once a paper is published, the opportunities for online references to it grow.

END_OF_DOCUMENT_TOKEN_TO_BE_REPLACED

ResearchGate: an alternative to traditional publishing?

ResearchGate, a Q&A site that soon became known as ‘Facebook for scientists‘, has announced its intention to function as a publishing platform for scientific researchers and offer an alternative measure of reputation in that community.

Started in 2008 with few features, ResearchGate was reshaped with feedback from scientists and has attracted several million dollars in venture capital from some of the original investors of Twitter, eBay and Facebook. According to the website, more than 1.9 million scientists currently share papers, publish data and engage in discussions on its platform. Now an ‘RG Score’ has been designed to make those interactions visible and quantifiable.